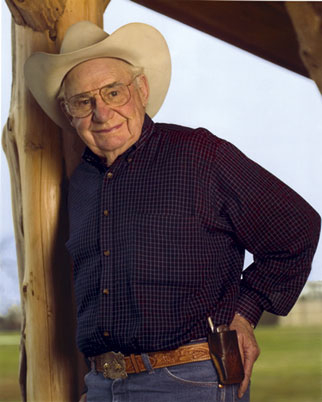 How did breaking a horse look like 60 years ago in comparison to today?

Everything was done on force and restraint. Restraint dominated all the training techniques. In those days we pulled up the horse’s hind leg and tied one leg up in the air, then sacked him out. In fact he was restrained so he couldn’t really do anything. And that kind of stayed that way until 40, 50 years ago.

Now we let him walk in the round pen, we approach him gently and do it quietly until the horse is happy to accept what we are trying to show him. Tom Dorrance and Ray Hunt have changed all of that.

What has been the influence of people like Tom Dorrance and Ray Hunt in the way people think about training horses these days?

Tom and Rays method awakened all serious horseman that there is a better way to train a horse. And they entered this into a new form of horsemanship that the Old World approves of.

We see everyone going into the round pen working the Tom Dorrance routine – we see it all over the world now. It’s not just in America. People are doing it in Europe and they are doing it in Australia. And they’d be doing it in Africa if there’re any horses there. Tom and Ray have had world wide influence.

How come this knowledge has travelled throughout the US so quickly?

Actually it travelled so fast because there was a demand for it. Everybody knew that Ray and Tom did these things and cause they all wanted to see it. This put Ray Hunt on the road. He lived on the road for 20 years. He was quite an influence because he was everywhere for 20 years.

Tom wasn’t that way. He stayed at home, but he taught Ray what he knew. That was the situation.

Did people pick up on it easily?

They picked on it because it was so positively radical, you know. To put a horse in a round pen and do nothing but stand there and let him walk around, get your hands on and be riding him within an hour was pretty radical training. And do it gradually without the horse bucking or anything.

Anything as far fetched as this was bound to have an influence. So this is exactly what happened. It was a big change.

Can you say more about the round pen as a teaching tool?

We know now there is an easier way to train a horse.

And the easier way is build on Natural Horsemanship: We don’t hurry our horse, we take our time with him and go through a routine that makes things happen. Of cause the place for it is the round pen. We know it’s possible and so much easier to work a horse in the round pen because the horse has some freedom in there and we can get to him with less stress.

This is the influence Tom and Ray had on all of this. Their methods are proven and the whole world approves of it.

You must remember: the horses, Ray Hunt put into the round pen as a 2 year old, were completely different horses than the Old World dressage horses have been in the past or of today. Especially as far as the gentling process is concerned – they are halter broken, people have spent time with them and they get started when they are around 3 or 4.

Ray’s horses were broncos, taken off the range or mustangs, taken out of the hills out in Nevada!

What would you say about Tom Dorrance’s and Ray Hunt’s teaching style?

I knew them both for 50 years. One of the things about them, of cause is they could be doing these wonderful things with horses.

As far as great teaching is concerned, Tom was a much better teacher than Ray. Actually what happened, and I am not afraid to say this because I think its true, they where much better at doing things and showing you and you had to watch what they did and then go home and practice.

As far as explaining to you „this is what you are doing wrong, here is how I am going to help you“ that did not happen. You must remember they primarily put a horse in a round pen and did it themselves and you watched them. And you learned from what you saw them do.

That was their mode of instruction. They were both great teachers.

How would you describe Tom Dorrance?

People don’t realize, Tom had genius mentality. He could see things in a horse that no one else did. I saw him do miraculous things with horses no one else would even think about, you know. Because he has been so observant and so intelligent. He was fantastic. He had the inner sense of knowing what was going to happen – because he was so observant.

You must remember: in all Horsemanship the greatest weapon you have is your power of observation. People don’t realize that.

If you watch the horse he will tell you.

In what way has Natural Horsemanship influenced the way we look at horses?

We look at horses knowing that it is so much easier to train a horse and to help a good horse. Even mediocre horsemen feel that they can get along with a horse when they use a few of the techniques.

All the horsemen on television like Pat, Chris Cox, Craig Cameron, Clinton Anderson are very very strong on groundwork. The whole program is based on that ground work. And this is a good thing – especially for amateur horsemen, anyone that has some fear in them will give them some confidence and go ahead and do things with their horses.

This is a way how Natural Horsemanship has influenced the way we look at horses.

What are the qualities you like most in a horse?

The qualities I like most in a horse is first of all quietness and the next is willingness. These are two qualities which are dominant with me.

What are the qualities you like most in a horseman?

First of all it’s thoughtfulness, then desire and then persistence.

You really got to want to and pay the price with persistence, stay with it.

Well, thoughtfulness, desire and persistence will get you talent.

You have become very interested in including dressage into your work. There is a whole movement developing called Cowboy dressage. What is it about?

Western horsemen are finally discovering – and it’s been taking a long time – that the benefits of Dressage training really do work and it’s what they need. They can observe the wonderful changes they can make in the horse under the western saddle by using dressage techniques.

We probably won’t see Grand-Prix level but we will see some dressage type changes. They will include tempi, lead changes, pirouette and specially half passes and shoulder in movements. We are going to have competitions along that line.

What do you regard as the biggest challenge for humans to interact successfully with horses?

It’s time and patience. Those are the challenges. That’s what we must have to successfully interact with a horse. And it leaves out anger.

What do you regard as the most important issue in the horse / human relationship?

All amateur horsemen need to be constantly reminded of the fact that the horse is not equipped with human understanding.

The horse does not think like a human. You must think like the horse. And this is what most people get in trouble with. They don’t think like a horse. Don’t try to impress your horse with your line of thinking because it’s not going to work.

What would you like for horses to happen in the future?

The best thing that could happen in the future to all horses is that they become associated with better trainers – that they are lucky enough to fall into the hands of a good trainer.